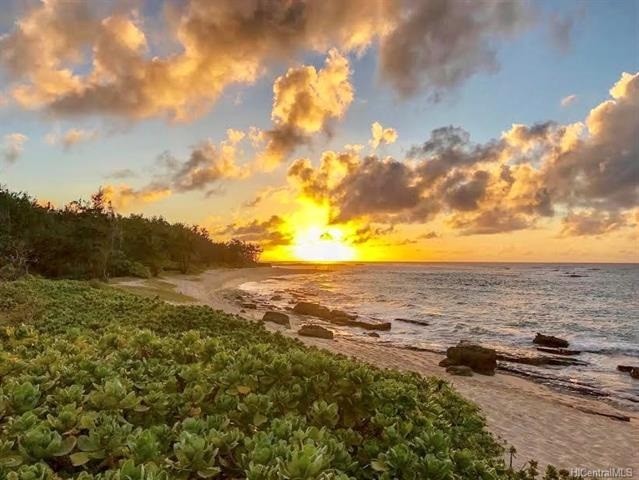 Kahuku is known for its beautiful beaches, hiking, fishing, art galleries, golf courses and several shrimp trucks. The community was created during the plantation era that swept across Hawaii in the late 1800s as a sugar mill plantation town nestled on Oahu’s North Shore.  Kahuku is now home to more than 2,600 residents. This neighborhood grew by 25 percent between 2000 and 2010 with the median age of residents being 35 years old.

During the plantation era, James Campbell purchased the land in Kahuku and instigated dry land water source development. Then, in 1890, he encouraged the entry of the Kahuku Sugar Mill into the community. To meet the intense labor needs necessary for operation, workers were brought in from Asia and elsewhere and housed on the plantation property. This is how the town of Kahuku Village began and was populated.

In 1971, the Kahuku Sugar Mill closed. Although the plantation ceased operation, the Campbell Estate worked with the community to bring replacement businesses to the area, and helped the farmers and laborers transition from large to small-scale farming.

In the Hawaiian language, ka huku means "the projection", so Kahuku could presumably be a reference to Kahuku Point nearby, the northernmost point of land on the island of Oahu. Or, if you break up the word differently, it has a different meaning as the first four letters, “Kahu,” means guardian, or royal keepers or protectors, while the last two letters “ku” could be a reference to an ancient Hawaiian god named Ku.

The zip code for Kahuku is 96731. In the mid-1970s a popular television game show, The Diamond Head Game, was done on the grounds of Del Webb's Kuilima Hotel, today’s Turtle Bay Resort. At the end of each show the announcer would say, "If you plan to be in Hawaii, send a self-addressed, stamped envelope to the Diamond Head Game, Kahuku, Oahu 96731." The TV series North Shore was later filmed at Turtle Bay in 2004, bringing the beautiful scenery of the area to the television viewers.

In addition to the golf course at Turtle Bay, there’s a 9-hole municipal, seaside golf course in Kahuhu. It’s a walking course with pull carts and golf clubs are available to rent. It’s known to be a challenging course in windy weather.

As far as the record is known, the first classes ever held at what was unofficially known as Kahuku school began in 1893. The classes were held under shade trees or in someone's yard. The school was first organized by a Hawaiian lady named Mrs. Hookana.

Four years later in 1897, with an appropriation of $984 provided by the sovereign nation of Hawaii, a one-room schoolhouse was built. Thirty-six students enrolled and Mr. Brightwell served as the first principal. By the 1920s the school was growing and moved to its present location. In 1939, the high school was added and the school was renamed Kahuku High and Elementary School. The next year, the first senior class graduated 16 students and they took home the school's first yearbook, the Ke Koolau.

The student athletes became known as the Red Raiders because they wore red uniforms donated by Iolani High School in 1950. Through the 1940's Kahuku competed in sports against other high schools and won its first football championship in 1947. This was the first in a long line of championships that began the development of many championship players.

A notable Kahuku High School graduate who has made his mark is Sam Choy, Jr. – well known as one of the top chefs who has a successful restaurant business.

Current real estate for sale in Kahuku is primarily found at Turtle Bay where there are 4 active listings in Kuilima Estates and 6 more listings in the Ocean Villas at Turtle Bay. During this time frame (at the end of Sept. 2018) there were also 4 single family homes for sale. Prices in the area range from $548,000 up to 3.65 million. Check out our featured listings to see a nice property currently for sale!